Protecting Our Little Corner of the Southern Blue Ridge

Employees of the Trust bring a broad, deep and complementary set of skill to the work they perform. This provides an eclectic experience for visitors to the Nature Center and to audiences engaged off the preserve. 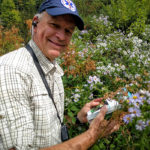 Michael is the executive director of the Balsam Mountain Trust, the nonprofit environmental education and research arm of Balsam Mountain Preserve. He is responsible for directing natural and cultural resource management, environmental education programming, and scientific research on the Preserve. Before coming to Balsam Mountain Preserve, Michael was the Emmy nominated host of “Georgia Outdoors” on Georgia Public Television. He is an experienced field ecologist, naturalist, nature photographer, environmental educator, taxidermist, and musician. His career track includes experience working in zoos (Lincoln Park, Central Texas Zoo and Zoo Atlanta); nature centers (Chattahoochee in Atlanta); and museums (Fernbank in Atlanta and Strecker at Baylor University, where he was also an adjunct instructor in the biology program). These positions have allowed him to travel extensively in the U.S. and abroad. Michael holds a B.A. degree in Wildlife Management from Southern Illinois University. Rachael is the administrator and assistant naturalist for the Trust. She graduated from   Haywood Community College with a degree in Wildlife Management and certification in Forest Management Technology. She grew up with an immense passion for animals and the outdoors and was always barefoot and outside in the dirt, which holds true today. Haywood gave Rachael a comprehensive and hands-on education by providing ample opportunities to work with the North Carolina Wildlife Resources Commission and other organizations of the like. She also spent two years at Cape Fear Raptor Center where she volunteered her time rehabilitating and releasing birds of prey, as well as working with a local wildlife rehabber.  Rachael continues to love anything wildlife-related and enjoys being hands-on to help our environment in any way she can.

Emily graduated from The University of Iowa in 2019 with a BS in Evolutionary Biology and a BA in Environmental Sciences. She grew up in the suburbs but relished any opportunity to explore the wilds around her. She developed a passion for wildlife at a young age but turned it into a career during college when she volunteered -and eventually interned with- the local raptor center in Solon, Iowa. She has since combined her love for education and animal husbandry by working and volunteering at several zoos and nature centers, notably a great green macaw rescue and breeding center in Guanacaste, Costa Rica.  Before starting her AmeriCorps service, she was lead camp counselor at Austin Zoo in Texas for two seasons.

Emily is serving with AmeriCorps, an eleven-month national service program with positions offered by community and non-profit organizations. CTNC manages an AmeriCorps program that has placed 18 members with conservation and environmental groups throughout North Carolina. The program’s goals are to connect thousands of people to the outdoors and to develop future leaders in conservation. Learn more about CTNC’s AmeriCorps program here.